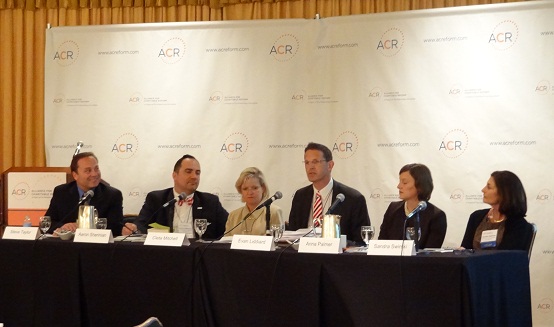 Although the charitable sector achieved many successes in 2013—providing testimony on Capitol Hill, securing bipartisan support for the charitable deduction, and mobilizing a grassroots effort conducting hundreds of meetings with lawmakers—threats to private charitable giving still remain. Tax reform will continue to be a point of interest in 2014 as the tax-writing committees prepare for change. The Senate Finance Committee will have a new Chairman earlier than anticipated. The House Ways and Means Committee may also be looking at new leadership after 2014. And of course it is also an election year.

With many tax issues still undecided, nothing is completely on or off the table. This is not the time for the philanthropic community to stay on the sidelines. Join us to learn about what we can do to protect private giving and educate lawmakers about the critical role of charitable organizations in a free society.

Registration: To register for the ACR Summit as well as other events of Philanthropy Week in Washington, click here.

8:00 – 9:30 a.m.
Welcome and Congressional Panel
With a change in leadership of the Senate Finance Committee and the prospect of new leadership for House Ways and Means in 2015, this is likely to be a “staging year” for tax reform. As issues of income inequality and economic mobility take center stage, Congressional staff will provide an insider’s look at the legislative landscape on Capitol Hill for 2014 and what issues could impact the philanthropic community.
George Callas, chief of staff, Ways and Means Subcommittee on Select Revenue
Aruna Kalyanam, tax counsel, Ways and Means Committee, Minority
Karin Hope, former staff to several Ways and Means and Finance Committee members. Current senior policy advisor and tax counsel, Joint Economic Committee
Paul Poteet, tax counsel, Senator John Thune (R-SD)
Brian Flahaven, director of legislative, foundation and recognition programs, Council for Advancement and Support of Education (moderator)

If you plan on meeting with members of Congress during your time in the nation’s capital, watch this video of former congressional staffers offering their advice on what you should know.

Foundations on the Hill and Philanthropy Week in Washington

The ACR Summit for Leaders will be part of the programming of Foundations on the Hill (FOTH), an annual opportunity for grantmakers and regional associations to meet with their federal lawmakers in Washington, D.C. The ACR Summit for Leaders and FOTH are two of the events of “Philanthropy Week in Washington“–a week of activities themed around engaging policy makers in the nation’s capital.

12 p.m. – 1:00 p.m.
Looking into the Crystal Ball: Future of State and Federal Tax Incentives for Charitable Giving (Lunch)
(Not included as part of the ACR Summit for Leaders. Registration for the lunch is available during the Philanthropy Week registration process.)

Visit www.foundationsonthehill.org for a full FOTH agenda and to learn more.

Participants – The ACR Summit for Leaders is open to representatives of foundations and nonprofit organizations. Participation in FOTH is limited to IRS recognized foundations and corporate giving programs.

The Problematic Characterization of the Charitable Deduction as a Subsidy